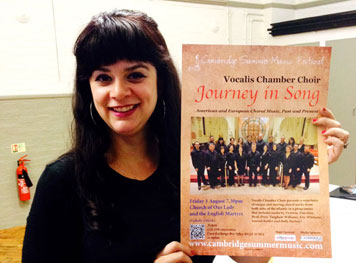 Vocális Chamber Choir embarked (or emplaned?) on their first international tour summer 2014, performing in some of the best venues in England. Planning started more than a year in advance, but it seemed the happy day would never come…

Most of the group flew in together on Delta via Detroit, with a few free glorious days in London before rehearsals started. 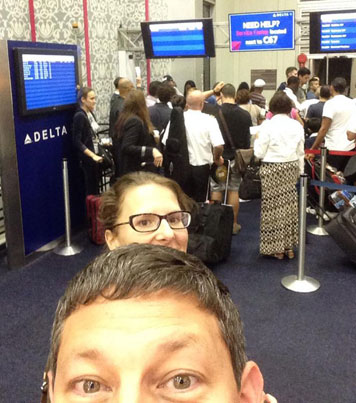 Beers outside Buckingham Palace, rush tickets to West End shows, poppies at The Tower of London, jaunts to the V&A Museum… We burned up Facebook with all our photos posts, and the hashtag #VocálisDoesEngland became a common sight on social media. And speaking of social media, a new kind of ‘selfie’ was born – The Frieder. 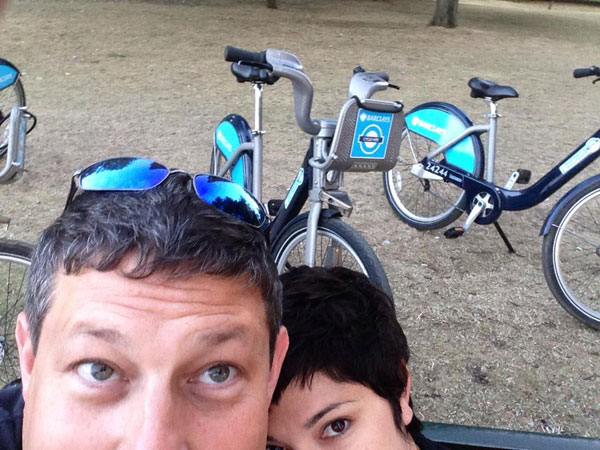 Nancy and Vera, along with traveling friends and family, made sure there was lots of socializing and drinking. Group cohesion ensued.

Some Vocálistas had never been to Europe before, others had visited and performed in England many times, and one of our members even lived there for 5 years. But it was London-based Andrew Cantrill, formerly of St Paul’s Buffalo, who was the angel in the details of the trip. Not only did Drew sing Tenor and play organ for us, he was instrumental (ha!) in booking us into some of the most prestigious venues in England. And some of the most stuffy! There was record-breaking heat in southern England this summer, and with our trusty purple wool robes transported all the way from St Paul’s… well it got a little funky in those hot churches. But the Board members traveling with us were diligent in keeping us fed & watered, happy, healthy and well prepared for the concerts. Their dedication on the trip, and back in Buffalo, is a huge part of the reason the whole adventure was such a success! 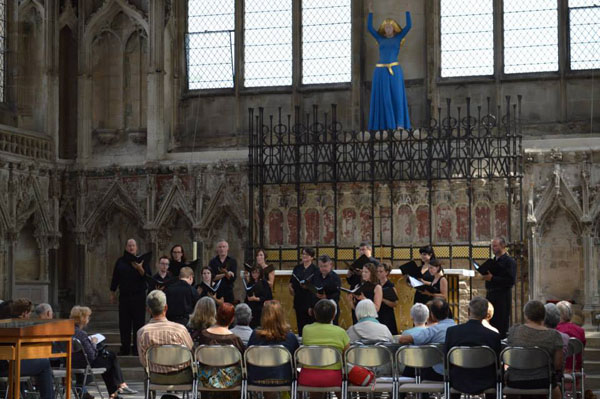 Our home in Imperial College London was well positioned in South Kensington for great cafes, bookstores, museums and the Tube. Fighting 100s of Italian schoolchildren in line at breakfast every morning, standing between us and the re-hydrated eggs, was how most days started but the accommodations were pretty comfy.

We sang two Evensongs in Southwark Cathedral, one of the few Medieval churches left in the capitol. On the second day, we celebrated the Feast of St Olav; it was not only the 150th anniversary of the Norwegian church overseas, but 1000 years to the day of the rescue of London by St Olav! 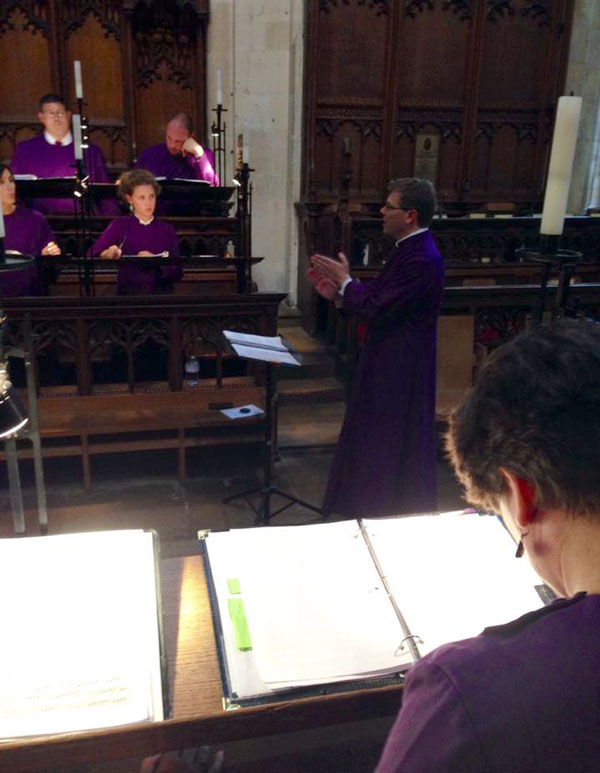 The chapel was packed with hundreds of Scandinavians who’d come over for this event. Singing a double-header one day, we performed at Grosvenor Chapel Mayfair in a joint Organ Concert with Drew before heading back to Southwark. As hot as it was, the lovely Thamesian breeze was always at our backs. Lunch at Borough Market was a nice touch to being in this area!

On Wednesday? A relaxing train jaunt through the East Midlands to Cambridge, and this free day perambulating the historic city came just in time. A nice long walk through the Backs revealed most of us had fallen in love with the same cow grazing in front of Kings College Chapel. 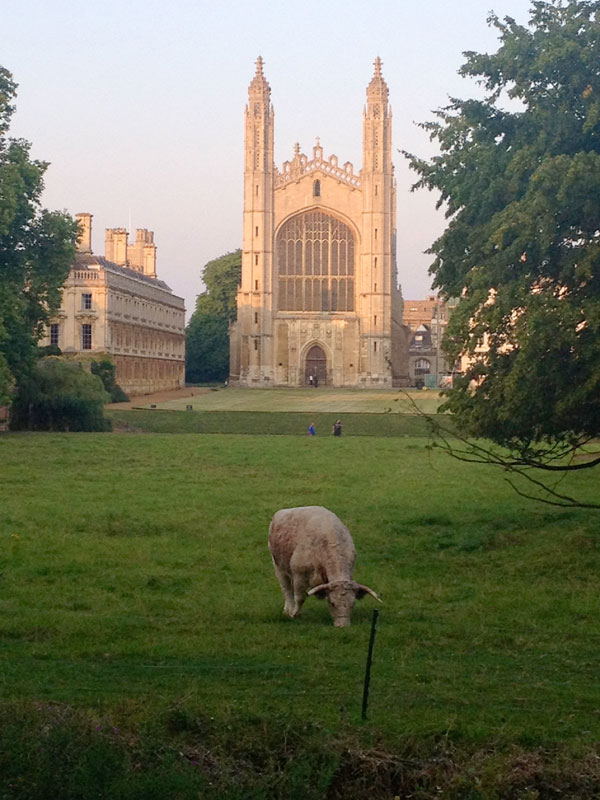 That night the whole group gathered for drinks & gaiety in the hotel bar. Turns out the Cambridge Folk Music Festival had just started, so I sang a few tipsy Joni Mitchell (and even Bryan Adams) duets with another hotel patron and his guitar.

After a nice day off in Cambridge came another double-header in Ely, a small but lovely town in Cambridgeshire. Everyone agreed this was the most magical day of the trip. Gorgeous, windy warm weather… sunlight streaming through the stained glass in the Lady House as we sang… the faces of the audience. That will stay with us forever. But the most magical moment? When the Vicar invited us up into the famous octagonal tower to sing! 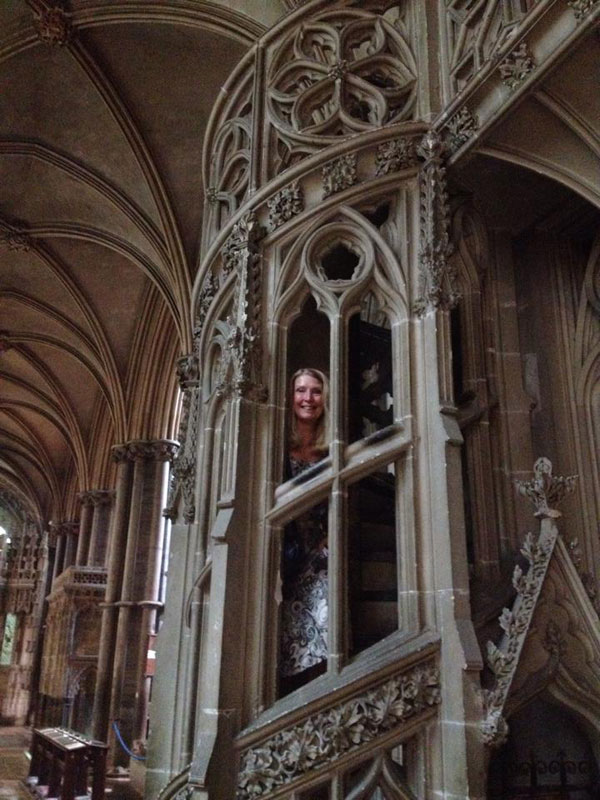 A few of us with health issues had to stay below, but the lion’s share of the Choir tramped up into that ancient spiral staircase; after a little photo shoot on the roof, one by one the doors of the tower opened. The gorgeous strains of CV Stanford’s Beati quorum via floated down. I will never ever forget that magic! 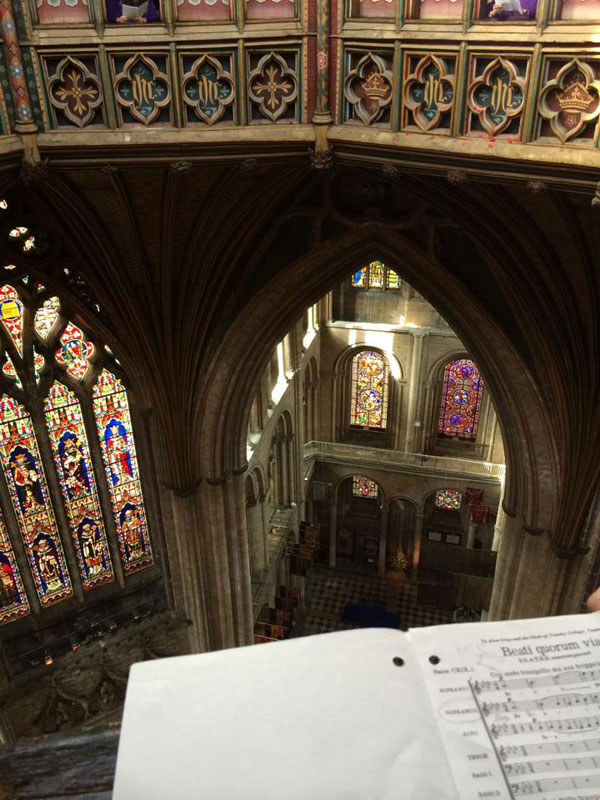 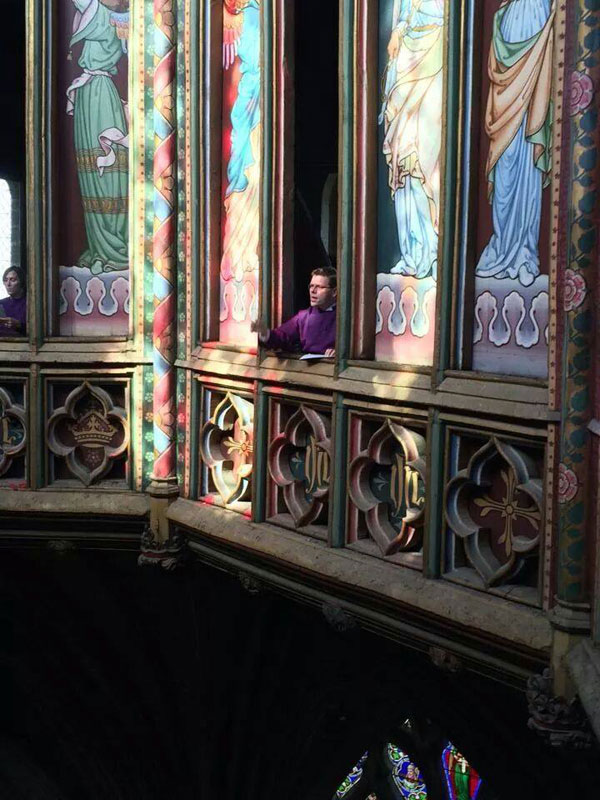 Now back to Cambridge for some punting – Vocális members raised on the briny shores of Lake Chautauqua had a punt-off, while the rest of us just hired Undergrads to ferry us around. Callouses and snark resulted. 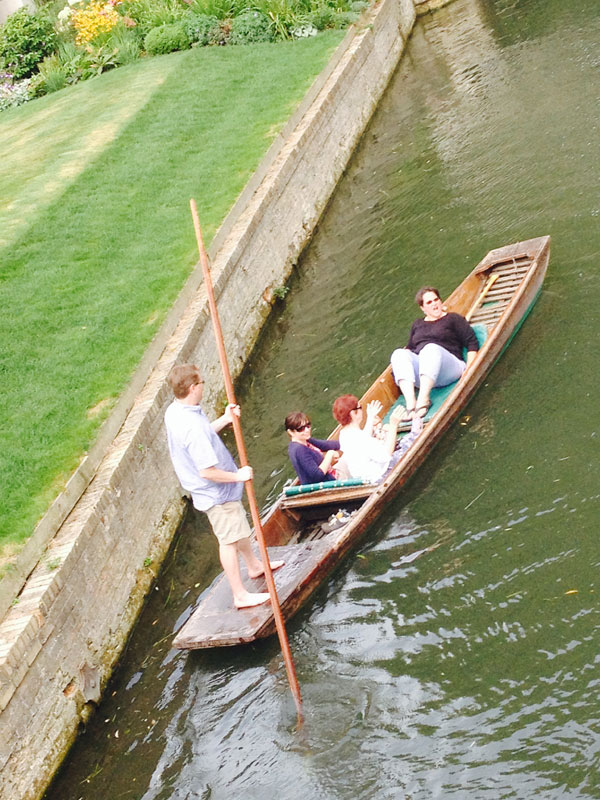 While Ely was indeed a perfect day, for this writer personally our concert on Friday August 1st at the Cambridge Summer Music Festival was one of the top 3 performances of my entire career! We were sandwiched between Sir Roger Norrington, John Rutter and The Carducci Quartet… how’s that for a prestigious roster?! The house was packed and the group sang the best I’ve ever heard them. 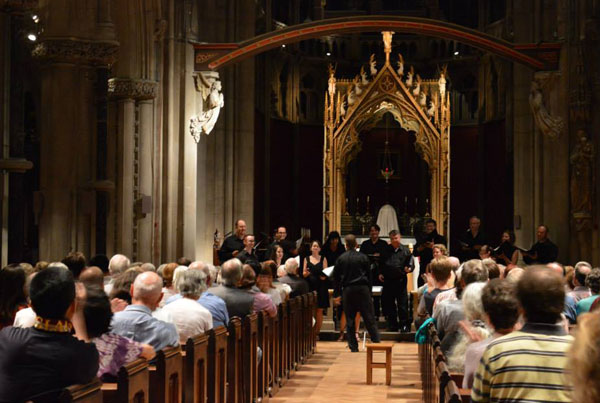 Everyone was focused, excited and dedicated – a total triumph! You can see the joy on our faces in this silly image taken by our trusty group photographer Chelsea Frieder. 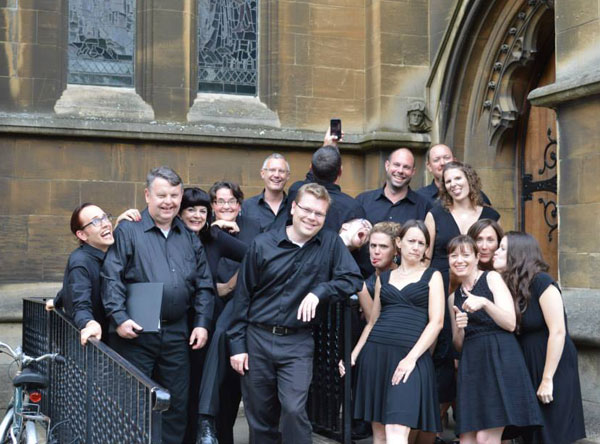 Sunday morning, for our final performance, we tried to take the Tube to the Old Royal Naval College in Greenwich, but British Rail did what they’re best at – messing up schedules without announcements. Somehow, we made it to the venue in the nick of time. It was so touching to sing during this very special Eucharist, commemorating a century since the entry of Great Britain into WWI. We were especially moved by some of the poetry recited, in memorium. The river of poppies throughout London was a constant and gentle reminder about this significant time in Europe. 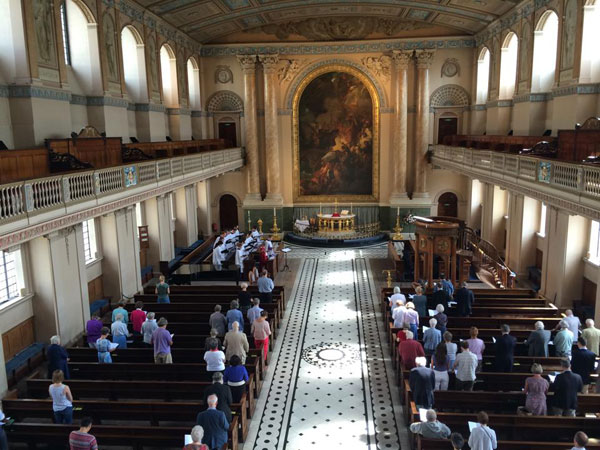 Our farewell banquet in Greenwich near the Cutty Sark was bittersweet; as much as we all missed home, this new universe the trip created for us was not easy to leave. And at the end? Some of us high-tailed it back to Buffalo (with an 8-hour detour for plane maintenance hijinks – of course) while others stayed in Europe; whether in London, heading up to Scotland to check out their ancestry, hopping a ferry to Amsterdam, or hearing early music concerts in Belgium. A last-minute reunion even came together a few days later in Chautauqua!

None of us wanted the journey, the time, the memories, the singing to end… Here’s to our 13th season, and many more to come! 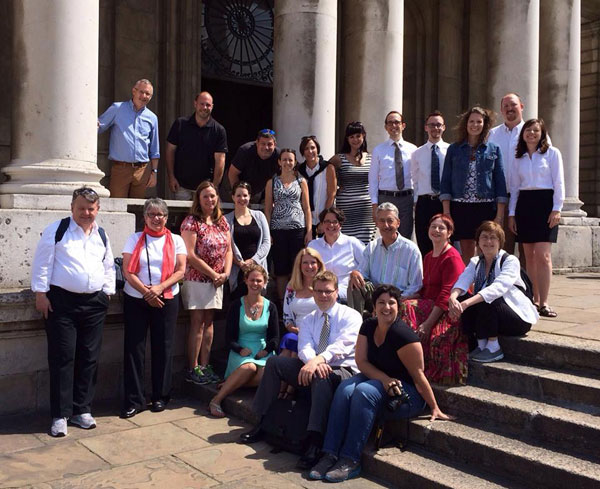 Vocalis Chamber Choir is a 501(c)3 non-profit arts organization. Gifts in support of our mission are greatly appreciated and tax deductible.
The Vocális Chamber Choir, a select ensemble of dedicated professionals based in Western New York, is committed to performing great a cappella music from all eras, and to cultivating an awareness of the art of choral singing. We strive to inspire, educate, and enlighten our audiences through an intimate and moving concert experience.

Vocális Chamber Choir is supported in part with cultural funding from the Cullen Foundation and the New York State Council on the Arts. Thanks to County Executive Mark Poloncarz, Governor Kathy Hochul, and the Erie County and New York State Legislatures for their continued support.